Breach of Contract Legal Plans Starting At Just $25 Per Month.

A contract is a constructional obligation. It’s a written promise to ensure that everyone receives fair treatment. Not only is breaching contracts against the law, but it’s also morally dubious.

The purpose of contracts is to make sure that everyone is treated fairly and not forced to do or provide anything against their will.

Breaching contracts means that people are not getting what they’ve signed up for.

Let’s say we both sign a contract which says that every Saturday, you will mow my lawn, and I will give you $10.

This would annoy you because you’ve now wasted your time mowing my lawn and I’ve not even given you what you deserve.

In the world of business, breaching contracts can result in people losing millions, their jobs, or even their companies.

But what does breaching contracts mean?

Breaching contracts means to fail, without legal excuse, to perform any promise included within the contact.

If you fail to do what you’ve agreed to do, then you have just breached your contract.

Of course, there may be a good reason, for example, if you are physically or financially unable to honour your promises.

If however, compliance is possible yet still not carried out, this means that the contract has been breached. 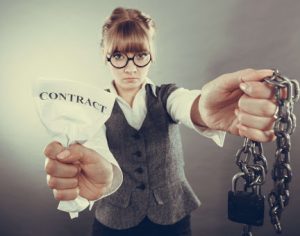 There are several ways of breaching contracts.

The first, and least damaging, is a minor breach.

This means that one party breaches part of a contract with minor consequences.

An example would be if you sign a contract that says if you mow someone’s lawn you will get an apple pie; however, you get a cherry pie.

In such a situation you may collect any damages that owed (in this example an apple pie). However, anything else is a no-can-do.

The second is a material breach.

This is when damage results from breaching a contract.

In such a situation the victim can claim extra compensation.

In our earlier example, let’s say that the victim is allergic to cherries. If they have an allergic reaction, they can claim for the breacher to pay their medical bills.

The third type of breach is a fundamental breach.

This is when a large and important part of the contract is not honoured.

In such a situation, the victim is able to sue and terminate the contract.

A good example of such a breach would be if someone fails to pay a large sum of money. Or perhaps someone does not receive the medical or social care they expect.

This is when a contract has not yet been finalised, but there is sufficient evidence to suggest that a breach would have occurred had you not intervened.

If you do ever find yourself as a victim of somebody breaching contracts you hold, the best thing you can do is to find yourself a law firm who’ll be able to help you.

They may well be able to help you sue for damages.

As with breaching, there are many types of damages, and your law firm will help you to understand which one to go for.

Compensatory damages are there to leave you in the same position that you were in before the breach.

For example, if you pay for something but don’t receive it, you should receive a refund.

Punitive damages are meant to punish the breaching party. They go beyond righting a wrong.

Nominal damages are nice gestures; money changes hands after a contract breach did not result in any financial damage.

Often the easiest to deal with, liquidated damages apply when the contract determines how to deal with damages.

Although damages are the most common option, your law firm may also choose to force the breacher to adhere to specific conditions.

Here, a court reprimands them and orders them to obey their contract.

If you’ve paid for a service you’ve not received, a court could force them to perform said services.

Alternatively, the law firm could help you to cancel the contract.

A contract is a constructional, written, obligation. To breach a contract means to fail to perform any of the promises within it.

Although breaching contracts can seriously hurt you, it can also be easy to recover from with the help from a good law firm.